The Shock Audits Keep On Coming

I know I've visited this subject before, but it bears repeating. Just today, I had two more small contractors reach out to me, each one a small employer crushed under a Workers Compensation insurance Shock Audits--where the premium developed after the policy has ended is far, far larger than the employer ever anticipated, based on the original policy premium.

One was an email from a Chicago small contractor, who bought a Workers Comp policy for $1,515.00, but who has now received an audit bill for $177,555.00 in additional premium for the policy.

The problem, as it often is, was that no one explained to this small business that payments to subcontractors would be picked up just the same as payments to regular direct employees of his company. This small biz had purchased an Assigned Risk policy, with Minimum Premium, and as is so common in such situations the insurance agent had not taken any time to explain the potential for this particular trap.

Agents who sell Assigned Risk policies to tiny employers often don't spend much time and effort explaining how the premium charges will ultimately be computed, after the policy has ended. And so these tiny employers are left thinking their Workers Comp insurance will cost only $1,500 or so in premium, only to be traumatized when they get the Shock Audit billing, after the policy has ended.

You might think such small employers might have a basis for holding the insurance agent responsible for this SNAFU, but that is not such an easy proposition.

So in this case, it doesn't appear the insurance company is necessarily wrong with this huge additional premium increase--although I'm still checking it to see if there are any potential avenues for reducing the bill--it's just that the insurance industry operates in such a way that these Shock Audit scenarios happen commonly.

I know, because I get the phone calls and emails when the bill arrives, every darn day. Sometimes I can help reduce the bill. Sometimes not. The devil is always in the details.

But it shouldn't be such an issue for small employers. Obtaining Workers Comp insurance should not constitute an existential threat to small business, and yet it does, surprisingly often.

Insurance companies tend to assume insurance agents explain all this stuff at the outset. They also assume most business people, even really small business managers, already understand these details.

Based on all these calls and emails, those assumptions too often don't hold up, with tragic results for small business.

My second Shock Audit contact today was from a Massachusetts small contractor. I'll cover that one in a separate post. 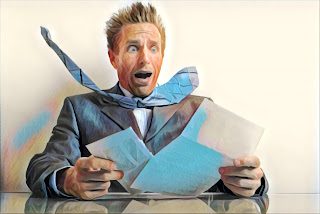