Just saw today a news item about Pennsylvania announcing lower Workers Comp rates that they say will save PA employers $150 million in premiums next year. This is good news, as it may reduce costs somewhat, for some employers. But I strongly suspect the actual impact for employers will be substantially less than advertised.

Here's why. A lot of states in recent years have been announcing reductions in what are known as "manual rates". My home state of Illinois has pronounced this kind of reductions for employers multiple times over the course of the past ten years or so. But overall premiums tend to keep going up. And what I observe by working with employers is that their Workers Comp premium charges generally aren't really declining.
This is because these "manual rates" are just the starting point in the computation of Workers Comp insurance premiums. And even when these manual rates decline, as was just announced in Pennsylvania, other elements of the Workers Comp pricing system change and more than offset those rate declines.
For instance, NCCI and some other rating bureaus have been busy in recent years tinkering with the formulas for experience modification factors. Those changes in the experience mod formulas translate to higher mods, and thus higher premium charges, for a lot of employers. For a lot of employers with a few costly claims in their recent history, the new mod formula more than offsets any reduction in manual rates.
Yet these changes in mod formula were not proclaimed loudly in press releases by governors and insurance regulators. They were quietly approved behind the scenes, briefly written about in the insurance trade publications, and then they became part of the complicated system of Workers Comp insurance pricing that is rarely, if ever, well understood by most employers.
Recent years have also seen the increasing use of "Large Deductible" Workers Comp policies for more employers. And it's not generally the case that employers clamored for these kinds of policies and the insurance industry responded by providing what was asked for. No, the insurance industry developed these plans for their own business needs and then gradually forced more and more employers onto them by not giving those employers Guaranteed Cost proposals any more.
If you think the standardized Workers Comp pricing rules were complicated, just try reading one of the convoluted "Side Agreements" that insurance companies use with these Large Deductible policies. Werner Heisenberg himself couldn't have done a better job of introducing the uncertainty principle into insurance pricing.
With Large Deductible policies, employers often have no damned way of really anticipating what their cost of Workers Comp insurance will ultimately be. Most of the agents and brokers who sell these programs can't really explain them well, because the programs are so complicated and jargon-laden that the people selling them don't really understand the details all that well.
But because these Large Deductible policies transform Workers Comp insurance pricing from being a function of payroll to being a function of claims (and not just paid claims but claims reserves, too) that employers can't, by definition, reliably know what their cost of Workers Comp insurance will really be, because the cost of the insurance will be determined by what the claims costs are.
So lower manual rates don't really make all that much difference in Large Deductible policies.
And of course, the premium shown on the policies is just an initial estimated premium. The real cost of the insurance is only determined after the policy ends, when the insurer does an audit. And again, any reduction in manual rates can be easily offset by just cracking down when the audit is done, enforcing obscure rules that were never clearly explained (if mentioned at all) when the policy was begun. Shock Audits, we like to call 'em.
And that doesn't even take into account Schedule Rating. This is a system of discretionary premium adjustments insurers tell regulators that they will apply based on certain objective criteria. They tell insurance regulators that, and then typically just use them as a way of manipulating premium charges to either discount accounts they're eager to acquire or to surcharge accounts when they think they can get away with it.
Again, a ten percent reduction in manual rates can get washed away pretty easily when you can switch from a twenty percent discount one year to a forty percent surcharge the next. And Schedule Rating allows insurers to do that kind of presto-chango magic trick with premiums pretty much at will.
So color me skeptical about these announced rate reductions. They're real, don't get me wrong. They just don't tend to actually reduce premiums for most employers.

We just got an email from a happy client. Refund checks totally $19,912 just arrived from their past insurer for policies going back to 2003. This is on top of the earlier $39,470 in refunds we had obtained for them back in December of 2016. It's Miller Time, I guess. But I don't drink beer. So, Macallan Time will do just fine. Neat, even.
Posted by Ed Priz at 8:56 AM No comments:

Keep Up the Bad Work, I Guess..

Just talked by phone to an old friend that I used to work with at another shop, where we had started this whole premium review and recovery thing back in the early 1980s. His shop, which is part of a larger insurance agency, no longer does this kind of work but he keeps his eyes and ears open, and he mentioned that he hears a lot of field auditors nowadays are under such tight time constraints when doing premium audits that they can't really do some audits properly, which can be another source for erroneous overcharges. As I often like to say, the insurance industry sometimes seems to be concerned about whether or not we have enough work around here. And they appear determined to make sure we never run out of desperate employers who are being put through the wringer over a Shock Audit.

So I guess I can only say, "Keep up the bad work, guys," and soldier on, catching and correcting the mistakes insurance companies make when calculating Workers Comp premiums for employers.
Posted by Ed Priz at 8:39 AM No comments: 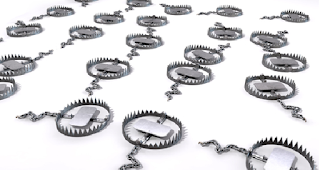