A Tale of Two Cases

Perhaps you can also file this under "American Horror Story". Let me tell you about two cases of mine. The names have been changed because they are both still ongoing cases, but I can share enough detail to explain my point without violating any confidentiality.

In one case, the employer has been criminally charged because he put down the wrong classification code on the application and the insurance company didn't catch it for several years. By the time the insurance company got around to figuring out that they didn't think the policyholder's expertise in classifications was very good, the insured company had gone out of business and the insurer couldn't get the money they felt they were owed.

So they got their friendly neighborhood prosecutor to file criminal charges. And now, as part of the negotiations to try and avoid a criminal trial, the insurer has suggested "restitution"--that is, pay them their money and they will arrange to have the criminal prosecution dropped.

My second case involves a major property/casualty insurance company that has just billed a policyholder for audited premium in excess of $700,000--from a policy that had an original premium of only around $1,500.00.  Yes, this employer bought a policy that he thought was going to cost $1,500--but the insurance company has retroactively sent a bill for more than $700,000.00 for that same policy.

And the galling thing is that this $700,000 bill is based on the insurance company ignoring the well-established rules that govern premiums in the particular state involved.

When this problem was brought to the attention to state insurance regulators, and NCCI, they all agreed it seemed to be wrong--and then collectively washed their hands and said there was nothing they could do. The policyholder should go to court, they helpfully suggested.

So, when the insurance industry feels an employer has based premium on a faulty or incorrect understanding of their arcane rules, and then can't pay what the insurance company feels is the proper premium, they get criminal charges filed.

But when an insurance company comes up with an outrageously inflated premium bill that is based on a clear and flagrant disregard for the rules that apply in a particular state, though, the insurance regulatory system shrugs and suggests the policyholder consult an attorney.

Does anyone else feel like something is wrong here? 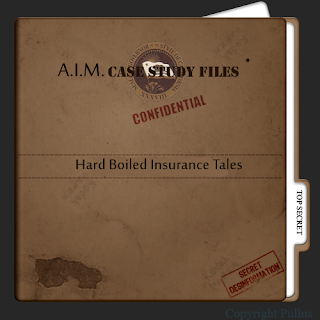 Hysterical Over Reaction from Insurance Industry About Filing Rates

“It's the harshest and most opposed regulatory type of structure that I have ever seen because we are going to have to seek permission from the government to charge a final price on the workers compensation insurance that we provide to our customers,” Steve Schneider, Chicago-based vice president for state affairs for the Midwest region for the American Insurance Association, said in published reports.

Holy Cow? Really? Mind you, the new laws would not really prevent insurers from using whatever rates they want, because the Illinois Department of Insurance is pretty understaffed, thanks to the deliberate behind-scenes lobbying by the insurance industry years ago.

And actually regulating Workers Compensation insurance rates was the norm, the standard practice, for many decades. To quote one of my older insurance textbooks (from 1986):

"the regulatory review process verifies that insurance rates are adequate, not excessive, and not unfairly discriminatory."

Until the late 1970's and early 1980's, all insurance companies had to use the same exact damned rate schedule, which had to be approved in advance by insurance regulators who, you know, actually regulated insurance. To make sure that rates were adequate, not excessive, and not unfairly discriminatory. What a quaint idea!

Even once so-called "competitive rating" began, insurance companies had to still submit their rating plans for approval. So this ridiculously over-the-top response by the insurance industry to these new Illinois regulations strike this observer as, well, ridiculous. This new legislation would merely return, on paper, the conceptual framework that governed Workers Compensation from its earliest days

Relax, boys, you'll still be able to get away with charging whatever you think the market will bear. This new legislation provides merely the smallest fig leaf on the current unregulated status of Workers Compensation. It doesn't really do anything meaningful, more's the pity. But even a tiny fig leaf is enough for the insurance industry to react like someone's proposing to erect a monument to Joe Stalin in Hartford, Connecticut and send their underwriters to re-education camps.